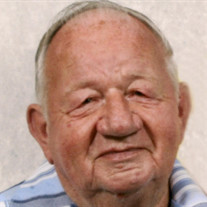 He was preceded in death by his parents, one son, Billy Gene and two daughters, Veronica and Sandra.

He served his country in the United States Army and was a member of the Rutland American Legion, St. Mary's Catholic Church in Wenona and a member of the Knights of Columbus.

Funeral mass will be held at 11:00 a.m. on Thursday, August 6, 2015 at St. Mary's Catholic Church in Wenona. Father Stephen McKinley will officiate. Visitation will be held one hour prior to services at the church on Thursday. Burial will be in Reilly Cemetery in Wenona. Ruestman-Harris Funeral Home in Minonk is handling arrangements for the family.

To send flowers to the family or plant a tree in memory of William J. "Bill" Arndt, please visit our floral store.

To send flowers to the family in memory of William Arndt, please visit our flower store.