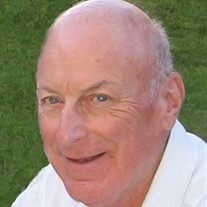 His funeral will be at 11am on Thursday, August 15, 2013 at The
Church of Jesus Christ of Latter-day Saints in Normal. Visitation
will be held from 5-7 pm on Wednesday, August 14, 2013 at
Kibler-Brady-Ruestman Memorial Home in Bloomington and one hour
prior to the service on Thursday at the church.

Interment will be at East Lawn Memorial Gardens in Bloomington
with full military rites  accorded by the Bloomington-Normal
American Legion Honor Guard. In lieu of flowers, memorials in Bob's
name may be directed to The Humanitarian Fund for natural disaster
victims or to The Perpetual Education Fund to support higher
education in third world countries through the Church of Jesus
Christ of Latter-day Saints.  The family has entrusted
Kibler-Brady-Ruestman Memorial Home to handle Bob's
arrangements.

He was preceded in death by his parents; a son, Peter Gregory
Andrew and a sister, Mary Grace Schilling.

After high school, Bob served in the Air National Guard. During
this time Bob began his career at Country Financial Insurance
Company first in Chicago, IL before relocating to Normal, IL. He
worked as a life insurance underwriter for 36 years until he
retired in 1996. Bob also worked ten years as a shuttle driver for
O'Brien Mitsubishi in Normal, IL.

He was a member of The Church of Jesus Christ of Latter-day
Saints in Normal and served as a missionary in the Western States
Mission from 1959-1961. Through out his life he served in various
positions in the church such a financial clerk, Bishopric member,
Cub Scout leader and Seminary Teacher.

Bob was best known for his sharp wit and sense of humor. He
loved gardening, music, taking his kids on bike rides and swimming
with his family. He was a hardworking man, whose family and church
were very important to him.

He was a wonderful father and husband, he will be greatly missed
by his family and friends.

Online condolences may be made to the family at
kiblerbradyruestman.com

To send flowers to the family or plant a tree in memory of William R. "Bob" Andrew, please visit our floral store.

To send flowers to the family in memory of William Andrew, please visit our flower store.