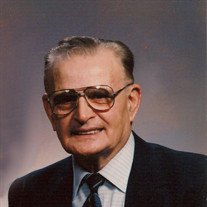 MINONK- Wilbert Rossman, 100, of Minonk passed away at 1:00p.m. on Tuesday, April 28, 2015 at the Apostolic Christian Home of Eureka.
He was a member of St. Patrick's Catholic Church in Minonk where a mass of Christian burial will be celebrated at 11 AM ,on Friday May 1, 2015. Father Lloyd Cunningham will officiate. Visitation will be from 9:30-11a.m. on Friday May, 1, 2015 before the services at church. Interment will be in St. Patrick's Catholic Cemetery, Minonk where military honors will accorded at the grave. Ruestman-Harris Funeral Home in Minonk is handling arrangements for the family.
Memorials may be given to the Humane Society. Online condolences may be directed to his family at www.ruestmanharrisfuneralhome.com

Wilbert was born on September 5, 1914 on the family farm south of Minonk a son of Lawrence and Anna Noe Rossman. He married Gertrude Lutz on February 7, 1941 in Davenport, IA.

He was preceded in death by his wife of 72 years Gertrude, four sisters and two brothers.

Wilb was a WWII Vet serving in the European theater. He was attached to the 36th Armored Infantry Regiment which was part of the famed ‘3rd Armored Division' He landed on Omaha Beach, fought through Normandy, France Belgium, Battle of the Bulge and Germany and met up with the Russians at the end of the war. They liberated two concentration camps. Wilb was a radioman for his company fluent in Morse code.

He was a farmer and carpenter building his home where he resided for 50 years. His workshop was the source of many creations. He made dozens of wooden windmills and proudly displayed them on the 4th of July. He donated many of them to the children's museum in Bloomington-Normal.

Wilbert was loved by all and will be missed by his family and many friends. He missed his wife greatly after her passing in 2013 and now they are together forever with the lord.


To send flowers to the family or plant a tree in memory of Wilbert Rossman, please visit our floral store.

To send flowers to the family in memory of Wilbert Rossman, please visit our flower store.