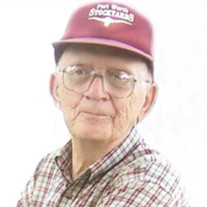 He was preceded in death by his parents, one son, Gary; one sister and one brother.

Wayne worked for Ford's Electric and later Spires Electric in Minonk and retired as custodian for Minonk-Dana-Rutland High School.

An Army veteran, he served his country during WWII.

Wayne was a member of the Minonk United Methodist Church.

Private family services will be held. Burial of cremains will be in Rutland Cemetery with military honors. Ruestman-Harris Funeral Home in Minonk is handling arrangements.

Memorials may be made to the United Methodist Church in Minonk.

Online condolences may be sent to the family at www.ruestmanharrisfuneralhome.com.

To send flowers to the family or plant a tree in memory of Wayne James Tucker, please visit our floral store.

To send flowers to the family in memory of Wayne Tucker, please visit our flower store.