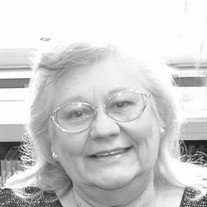 Her funeral will be held at 10:00
a.m. on Wednesday, March 5, 2014 at Kibler-Brady-Ruestman Memorial
Home, in Bloomington with Dr. Clark S. Killingsworth
officiating.  Visitation will be from 4-7 p.m. on Tuesday,
March 4, 2014 at the Memorial Home.

Burial will be in East Lawn
Memorial Gardens, Bloomington. Memorials may be made to St. Jude
Childrens Research Hospital.  Kibler-Brady-Ruestman Memorial
Home in Bloomington is assisting the family with
arrangements.

Virginia was born on March 21, l933
in Bloomington , a daughter of Clarence and Marguerite (Koch)
Wilcox.  She married Orville Gannaway, January 12, l951 in
Normal, he survives.

She was preceded in death by her
parents and four brothers, Donald, Harold , Melvin and Gary Wilcox
and two sisters Rose Otto, and Rosealee Wilcox.

Virginia worked at Mennonite
Hospital in Bloomington for several years before becoming a
surgical technician at the hospital.

She and her husband enjoyed 63
years of marriage together, she was involved in the family
construction business for many years.  She was a homemaker and
a volunteer at Eugene Field School during the time her children
were attending.

Virginia enjoyed her children and
grandchildren's  activities until she could no longer attend
their events.  She was a  loving Wife, Mother and
Grandmother and Great-Grandmother, who will be dearly
missed.

To send flowers to the family or plant a tree in memory of Virginia "Mae" Gannaway, please visit our floral store.

To send flowers to the family in memory of Virginia Gannaway, please visit our flower store.