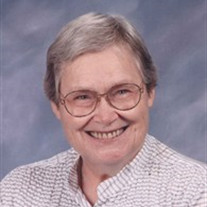 
She was preceded in death by her parents, two sons
and one sister.


Violet worked as an activities aide at Maple Lawn
Homes for 22 years.


Violet was a member of D.A.R.-Daughters of the
American Revolution, Eureka United Methodist Church and Modern
Woodman of America.


She was an avid gardener all of her life. Violet was
a woman of great faith.  She tirelessly was an advocate for
volunteering her services wherever needed .


Memorial contributions may be made to the Eureka
United Methodist Church or National Epilepsy Foundation. Online
condolences may be sent to the family at
www.ruestmanharrisfuneralhome.com.

To send flowers to the family or plant a tree in memory of Violet Carey, please visit our floral store.

To send flowers to the family in memory of Violet Carey, please visit our flower store.