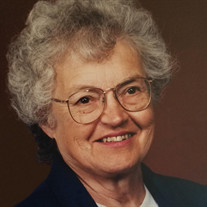 Theresa was a homemaker and an amazing seamstress. She also enjoyed quilting, gardening, canning, collecting antiques, and assisting her husband on their farm. Her work ethic, determination, and joy in visiting with friends and strangers will be forever remembered.

She was preceded in death by their two sets of infant twins, Mary and Marie, Lloyd and
Lawrence; two brothers, Henry "Hank" Mattern, Clarence Mattern; one sister, Grace Bogner.

She was a member of the St. Mary's Catholic Church in Henry where Mass of Christian Burial will be held at 11:00 am on Wednesday January 10, 2018. Father John Mujini will officiate. Visitation will be held at Lenz Memorial Home in Lacon, IL, on Tuesday evening, January 9, 2018, from 5 to 7 p.m. and one hour before funeral service at St. Mary's Church in Henry, IL, on Wednesday. Burial will be in Calvary Cemetery in Henry, IL. Ruestman-Harris Funeral Home in El Paso is assisting the family with their arrangements.

Memorial contributions may be made to OSF Hospice Care or OSF Children's Hospital of
Illinois.

To send flowers to the family or plant a tree in memory of Theresa A. Maubach, please visit our floral store.

Please click here to view the video tribute
To send flowers to the family in memory of Theresa Maubach, please visit our flower store.