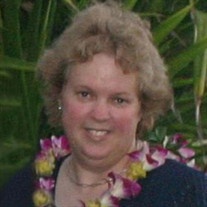 She was preceded in death by her father.

Tyke graduated from Normal Community High School in 1967. She went on to study at Illinois Wesleyan School of Nursing and graduated as an LPN. She worked at Heritage Health in El Paso for 27 years before retiring on July 17, 2013. She had a passion for nursing and took care of her patients with love and compassion. She also loved her dogs and spending time with her family. A celebration of life will be held at a later date.

A private funeral service will be held on Friday at Ruestman-Harris Funeral Home in El Paso. Pastor Brent Salm will officiate. Burial will be in Hudson Cemetery.

Memorials may be made to the Humane Society of Central Illinois.

To send flowers to the family or plant a tree in memory of Teryl "Tyke" Y. Engel, please visit our floral store.

To send flowers to the family in memory of Teryl Engel, please visit our flower store.