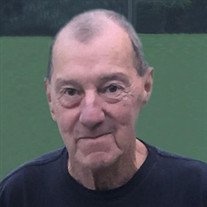 He was born October 17, 1949 in Bloomington, IL to Robert and Eunice (Lanigan) Tennison. He married Evy Armstrong on November 7, 1970 in El Paso, IL. She survives.

Terry worked for Firestone for a few years before going to work for American Buildings. After many years of dedicated service, he was able to retire. He was able to realize his dream of owning an antique car, his pride and joy, a 1967 Oldsmobile Cutlass Supreme. He was able to show it off at one car show and took home some hardware.

Terry was an avid Cubs and Bears fan. Loved watching old westerns and enjoyed cracking open a Budweiser and hanging out at his second home, Topsy's Bar and Grill. It was no secret, he had a love affair for Little Debbie. Most of all, he loved spending time with his family and especially watching his grandchildren play sports.

A private memorial service will be held on Friday, November 6, 2020 at Ruestman-Harris Funeral Home in El Paso. Cremation will be accorded.

Memorials may be made to St. Jude Children's Hospital.

To send flowers to the family or plant a tree in memory of Terry E. Tennison, please visit our floral store.

Please click here to view the video tribute
To send flowers to the family in memory of Terry Tennison, please visit our flower store.