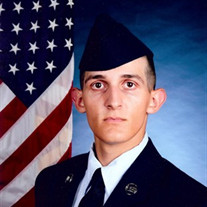 El Paso- SrA Michael Scott Snyder, 23 of El Paso stationed at
Buckley Air Force Base, Denver, CO passed away on April 9, 2014 in
Aurora, Colorado as the result of a motorcycle accident.

Michael was born February 6, 1991 at Bloomington a son of Stacy
S. and Sandra Reeser Snyder.

He was preceded in death by his paternal grandfather, Russell
Snyderand his maternal grandfather, Ronald Reeser. Mike was a
graduate of El Paso-Gridley High School Class of 2009 and was a
member of the Union Church of Cooksville. He worked at Pfister Corn
Company, El Paso detasseling and also as a lifeguard.

He was a member of the El Paso Olympian Swim team and played
football with the El Paso JFL in Junior High. He had an enormous
love of soccer.

He started playing in early grade school and continued to play
while in the Air Force with friends. During high school he played
with the Midstate Stars traveling team. His favorite position was
goalie. Mike loved everything outdoors especially fishing with his
dad and grandpas and water skiing.

He was an avid motorcycle rider. He belonged to the motorcycle
safety club at Buckley Air Force Base. His favorite place to ride
was up to the mountains near Denver. He also enjoyed working on
motorcycles and cars.

Mike had an enormous love of life and in return was an organ and
tissue donor. Most of all Mike loved and was proud to be an Airman
and serving his country. He was awarded the Air Force Commendation
Medal for Meritorious Service from April 22, 2012 thru April 9,
2014.

Mike was taken from us too soon. His infectious smile and
amazing personality were contagious. His passion was working with
computers. He continued his passion of computers in the Air Force,
but also loved building computers for his friends and gaming.

He will be greatly missed by his family, the community of El
Paso, and by all his brothers and sisters of his Air Force
Family.

Memorials may be directed to Gift of Hope or Mothers Against
Drunk Driving.

Online condolences may be directed to his family at www.ruestmanharrisfuneralhome.com.

To send flowers to the family or plant a tree in memory of SrA Michael Snyder, please visit our floral store.

To send flowers to the family in memory of SrA Snyder, please visit our flower store.