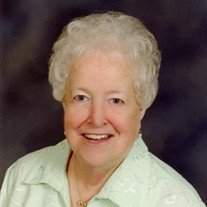 She was born January 13, 1923 in Clinton, Iowa to John and Mabel
Borden Dickey. She attended Clinton area schools and graduated from
Clinton High School in 1941.She married Donald L. Weyeneth on May
21, 1961 and made her home in Clinton until 1987. While in Clinton,
she volunteered with Mercy Hospital. She was a member of First
United Methodist Church where she and her husband taught the 3 year
olds. She also played in the church hand bell choir and was active
with United Methodist Women. She was a regular pollster at the
Clinton County Courthouse during local and national elections.

During WWII, she volunteered as a nurse's aid at Schick Army
Hospital in Clinton. She was employed for many years at Montgomery
Ward in Clinton, and later as a bookkeeper at Interstate Power
Company.

After moving to Roanoke in 1987, she and her husband joined the
Christian Union Church in Metamora, IL, and later, the Roanoke
United Methodist Church. She was active with the Roanoke United
Methodist Women. She was also a member of the Woodford County Farm
Bureau.

She is survived by her son Brian and daughter-in-law Teresa of
Mount Holly, North Carolina; her oldest sister Ella Dickey Manley
of York, PA; and youngest sister Mary Dickey Goodale of Baldwin,
MO. Also surviving are sister-in-laws Mrs. Melvin (Leona) Weyeneth
of Washington, IL; Mrs. Earl (Marilyn) Roth of Roanoke, IL; and
Mrs. John (Dorothy) Hoerr of Edwards, IL. She is also survived by
20 nieces and nephews, and many more great-nieces and nephews. The
family wishes to thank Mrs. Christina Shepard who served as her
caregiver and good friend while she lived in North Carolina.

She was preceded in death by her husband in 2000, two brothers
and three sisters.


The visitation will be at 10:00 AM on Wednesday, April 16, 2014
at Roanoke United Methodist Church, 401 North Church Street,
Roanoke, Illinois 61561 with funeral services following at 11:30
AM, the Reverends Dick Piscatelli and Charlie Graul, officiating.
Burial in the Roanoke Township Cemetery will follow the service.
Pallbearers, all nephews include: Merle Weyeneth, Jack Hoerr, Jeff
Hoerr, John Hoerr, Jim Barth and Breck Nelson. Knapp Johnson Harris
Funeral Home of Roanoke is serving the Weyeneth family.


Her family requests that memorials be made to the Roanoke United
Methodist Church or the Robin Johnson Hospice House, C/O Gaston
Hospice, PO Box 3984, Gastonia, NC 28054. Online condolences may be
sent to the family at www.ruestmanharrisfuneralhome.com. The family
wishes to thank the caring medical staff and volunteers at the
Robin Johnson Hospice House for their unsurpassed care, Christian
love and compassion given to our mother in her final days.

To send flowers to the family or plant a tree in memory of Sarena Weyeneth, please visit our floral store.

To send flowers to the family in memory of Sarena Weyeneth, please visit our flower store.