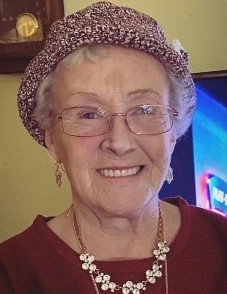 Sara was born in Galesburg on March 22, 1944, the daughter of Claude “Curly” and Jane (Peterson) Crouse. She married Larry Stotts on September 29, 1967 in Galesburg.

Surviving to cherish her memories is her Husband, Larry, of Peoria; her two daughters; Lynn (Dan) Staley of Lexington IL and Stephanie Rodgers of Bloomington IL; her sister Claudia (Norman) Carlson and two granddaughters, Raelyn and Emma Rodgers. She is preceded in death by her parents.

Sara graduated from ROVA High School in 1962, and attended Mid-State Business College in Peoria. She worked for former Bank of Galesburg, and later became a day care provider for local families in Oneida. She also served as the Librarian for the Greig Memorial Library for a number of years and was a member of the United Church of Oneida. Sara also really had a knack for writing. She loved journaling and was very talented. Some would say that she should have written greeting cards for Hallmark.

After retiring, Sara and Larry moved to Peoria and eventually settled into the Grand Regency Assisted Living facility. Sara was very active, leading Bingo, Bunko, delivering papers, and even had her own weekly “Sara’s Devotions” Bible study. She also enjoyed being a part of the Garden Group, helping to grow and take care of the plants/flowers that were grown there. The people there were like family to her.

During her time in Peoria, Sara was also an active member of the United Presbyterian Church. She enjoyed singing in the choir, leading Sunday School, and participating in many other activities.

Sara’s wishes were to be cremated. Ruestman-Harris is assisting with these arrangements. No services are planned at this time, but there will be a gathering/celebration of life planned for a later date. Online condolences can be left for the family at www.ruestmanharrisfuneralhome.com.

To send flowers to the family or plant a tree in memory of Sara L. Stotts, please visit our floral store.

To send flowers to the family in memory of Sara Stotts, please visit our flower store.