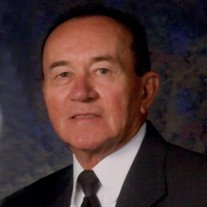 He was born on June 23, 1926 in Clayton Township in Woodford County to Rowland and Grace McChesney Tucker. He married Bonna Jo Manninga on December 8, 1946. She survives.

He was preceded in death by his parents and one brother.

Rowland attended the Jackson Country Grade School and graduated from Minonk Community High School in 1944. He farmed with his father and brother on their family farm, Elmwood Stock Farm noted for its tall elm trees and hundreds of livestock. After his marriage to Bonna Jo he was called to serve in the Army where he trained at Camp Polk, LA then was sent to Korea where he served with the Fifth Regimental Combat Team on the front lines. He then returned to farming and retired in 1992.

He and his wife enjoyed fishing in Wisconsin for many years as well as golfing and bowling. They also enjoyed visiting with their hundreds of friends when they went out for an evening meal.

A graveside service will be held at 3:00 pm on Monday, May 23, 2016 at Minonk Township Cemetery. There will be no visitation. Ruestman-Harris Funeral Home in Minonk is assisting the family. In lieu of flowers, memorials may be made to Heritage Manor in Minonk or the Minonk Ambulance Fund. Online condolences may be sent to www.ruestmanharrisfuneralhome.com.

To send flowers to the family or plant a tree in memory of Rowland Tucker, Jr., please visit our floral store.

To send flowers to the family in memory of Rowland Tucker, Jr., please visit our flower store.