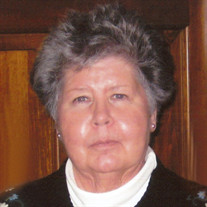 She was born on June 14, 1945 in Streator, IL the second child of Emory and Mary Schneider Seifert. She was named after her maternal grandmother Rose Schneider and her mother. She married David "Fuzzy" Timmerman on August 17, 1963 at St. Patrick's Catholic Church in Minonk. He survives.

She was preceded in death by her parents, and father-in-law Gus Timmerman.

Growing up Rosemary lived on a farm south of Toluca. She attended St. Ann's school until 1954, then the family moved to a farm north of Minonk where she attended St. Patrick's School and M-D-R High School. In 1969 Rosemary, David, and Scott moved back to the farm north of Minonk until 2007 when they semi retired and moved to Minonk. Rosemary was a farmer's wife all her married years and also sold Avon for 45 years retiring in 2017 and had many lasting friendships. Her hobbies included knitting, watching the birds, squirrels, and rabbits in the back yard, playing with her cat B-B, doing the daily Sudoku, and finding a perfect spot in her home for a treasure that her son would find.

Memorial contributions may be made to the Minonk Ambulance Squad. Online condolences may be sent to the family at www.ruestmanharrisfuneralhome.com.


To send flowers to the family or plant a tree in memory of Rosemary Timmerman, please visit our floral store.

To send flowers to the family in memory of Rosemary Timmerman, please visit our flower store.