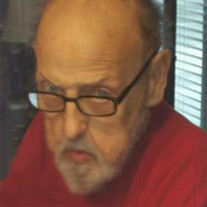 He was born on November 16, 1935 in Columbus, NE a son of Louis and Iona Bisson Wollberg. He married Dorothy West on October 4, 1986 in Eureka, IL. She survives.

He was preceded in death by his parents, one brother, and one great-grandson.

Bob worked at Bailen Manufacturing in El Paso. He then worked for the State of Illinois Department of Corrections in Pontiac retiring in 1998. He was a devoted employee in his retired years at the Ruestman-Harris Funeral Home in El Paso.

He was a member of the Trinity Lutheran Church in El Paso, AFSCME, and served on the El Paso Ambulance Squad.

Memorial services will be held at 11:00 am on Tuesday, December 30, 2014 at the Ruestman-Harris Funeral Home in El Paso. Rev. Jonathan Boehne will officiate. Visitation will be held one hour prior to the service. Inurnment will be in Columbus Cemetery.

Memorials can be left to the Trinity Lutheran Church in El Paso. Online condolences can be left at ruestmanharrisfuneralhome.com


To send flowers to the family or plant a tree in memory of Robert L. Wollberg, please visit our floral store.

Please click here to view the video tribute
To send flowers to the family in memory of Robert Wollberg, please visit our flower store.