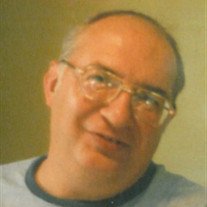 Robert E. Saunders, 81, of Bloomington, IL, passed away at 7:15
a.m. on Saturday (August 24, 2013) at Asta Care Center in
Bloomington. Cremation Rites have been accorded. The family has
requested memorials may be made in Robert's name to the Community
Cancer Center in Normal.

Robert was born December 13, 1932 in Bloomington IL, a son to
Harold and Hazel Valke Saunders.

Robert was preceded in death by his mother; two brothers, Harold
and Richard; and two nephews, Eric and Jeff Saunders.

Robert served in the United States Air Force for four years and
was stationed in Iceland. He later was employed at Illinois State
University for twenty-five years in the Food Service Department.
Robert was a member of Holy Trinity Church, the American Legion
Post 56 in Bloomington, IL, The Elks Club, and VFW Post 454.

Online Condolences may be made to the family at kiblerbradyruestman.com

To send flowers to the family or plant a tree in memory of Robert E. Saunders, please visit our floral store.

To send flowers to the family in memory of Robert Saunders, please visit our flower store.