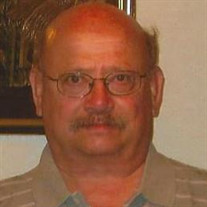 He was born on March 26, 1946 in Streator, IL a son of Joseph and Marjorie Meischner Rossman. He married Barbara "Barb" Klendworth on September 20, 1969 in Dana, IL. She survives.

He was preceded in death by his parents, one brother, Jerry Rossman and one sister, Mary Jane Rossman.

Bob was employed by Caterpillar and retired in 1994.

After school Bob served in the Army in Vietnam from 1967-1969. As a family we all benefitted from the skills he learned in Vietnam as a cook for the troops. His spaghetti and pies were wonderful. He was a member of the Rutland American Legion Post #1121.

He enjoyed playing the lottery and going to the casinos. But most of all Bob enjoyed spending time with his family and friends, especially the time spent with his daughter Marcy who was his greatest joy. He always enjoyed watching the Chicago Cubs, Chicago White Sox, and Chicago Bears.

Funeral services will be held at 11:00 a.m. on Monday, April 4, 2016 at Ruestman-Harris Funeral Home in Minonk. Reverend Ivy Silas will officiate. Visitation will be held from 9-11a.m. before the services at the funeral home. Burial will be in Rutland Cemetery where full military rites will be accorded at the grave.

Memorials may be made to the Rutland American Legion Post #1121 or a Charity of the Donor's Choice. Online condolences may be sent to the family at www.ruestmanharrisfuneralhome.com


To send flowers to the family or plant a tree in memory of Robert P. Rossman, please visit our floral store.

To send flowers to the family in memory of Robert Rossman, please visit our flower store.