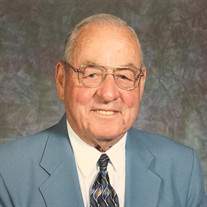 Robert J. Hock, Sr., 95, of Alamo, Texas, formerly of Minonk, died March 14, 2015 in Thousand Oaks, California. He was in the process of moving to California to be near family.

Survivors include five children, Carolyn Eikenmeyer (John) of Westlake Village, California, Robert Hock Jr. (Kay) of Minonk, Sandra Holter of Pueblo, Colorado, Jack Hock of Minonk, and Ronald Hock (Debbie) of Valencia, California, two stepchildren, Bonnie Jenkins of Anniston, Alabama, and Doug Beck of Chattanooga, Tennessee. He is also survived by 11 grandchildren and 10 great grandchildren. He was the last in his family, having been preceded in death by his parents, two brothers, two sisters, and a son-in-law.

Robert attended school in rural Minonk. He served with the U.S. Army in Germany in World War II. He and his brother, Raymond owned Hock Transfer, Inc., a trucking company in Minonk, for over 40 years until he retired in 1983. They also had farming interests. After his marriage to Arlene, they moved to a retirement community in Texas where they enjoyed golf and a myriad of friends. One of Robert's favorite activities was playing board games with his grandchildren. The whole family will miss those games.

Memorials may be made to a charity of the donor's choice. Online condolences may be sent to www.ruestmanharrisfuneralhome.com.

To send flowers to the family or plant a tree in memory of Robert J. Hock, please visit our floral store.

To send flowers to the family in memory of Robert Hock, please visit our flower store.