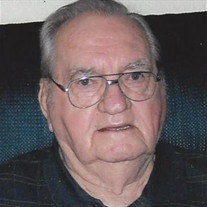 EL PASO- Robert E. Chinowth, 89, of El Paso, died at 2:23 PM on Thursday October 23, 2014, at St. Joseph Medical Center ER in Bloomington.
He was born in Carrollton, IL on July 1st, 1925; a son of the late Leland and Bernice Carter Chinowth. He married Clara V. Wilson in Carrollton on September 5, 1947 and she survives.
Also surviving are a daughter, Linda (Robert) Kidd, El Paso; a son, David (Susan) Chinowth, Atlanta, IL; 4 grandchildren, Richard (Sue Ann) Kidd, Jennifer (Kelly) Murrah, Nicholas (Bridget) Chinowth, Ashley ( Curt ) Alexander; 7 great-grandsons; sister-in-law, Betty Chinowth; and several nieces and nephews.
He was preceded in death by a brother, Dick Chinowth.
Robert served in the Airforce during WWII. He fought in Southeast Asia earning 3 Battle Stars and the Southeast Asia Command Medal. He worked in sales for Noll's Bread, Mrs. Allison's Cookies, and Woodhouse Merchandising Food Brokerage. After retirement he worked for 3 funeral homes and worked security for Dupont in El Paso. He was a member of the Northbridge Baptist Church, the American Legion, AMVETS, and a lifelong member at the Stewart Pearson Masonic Lodge in Carrollton.
Memorials may be given to Northbridge Baptist Church, Normal, or the El Paso Rescue Squad.
Memorial Services will be at 11 AM Wednesday October 29, 2014 at Northbridge Baptist Church in Normal, IL with visitation held 1 hour prior to services at the church. Revs. Jan Hazecamp and Michael Sloan will officiate. Masonic Rites will be presented. Cremation has been accorded and inurnment will be at a later date in Godfrey, IL where military rites will be presented.
Ruestman-Harris Funeral Home in El Paso is assisting the family with arrangements. Online condolences may be sent to the family at www.ruestmanharrisfuneralhome.com.

To send flowers to the family or plant a tree in memory of Robert Chinowth, please visit our floral store.

To send flowers to the family in memory of Robert Chinowth, please visit our flower store.