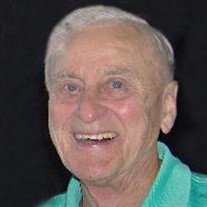 Minonk- Richard L. "Shock" Shelby, 87, of Minonk passed away at 5:05 p.m. on Monday, July 13, 2015 at his son's residence in Minonk.
He was born November 24, 1927 at Cabery, Il a son of Louis W and Elsie Johnson Shelby Jr. He married Marilyn L. "Bubbles" Leigh on May 20, 1950 at St. Patrick's Catholic Church, Minonk. She died May 14, 2014.
Survivors include two sons; Dick (Karen) Shelby, Decatur and Don (Cindy) Shelby, Minonk; four grandchildren; Shawn Shelby, Decatur, Jason Shelby, Kansas City, MO, Travis Shelby, O'Fallon, and Kristen Shelby, Minonk; three great grandchildren; Allie, Kaiden and Aleigha.
He was preceded in death by two sisters, Marian and Gen and one brother, William.
"Shock" was a member of St. Patrick's Catholic Church and the Minonk American Legion. He served with the United States Army during WW II. He and his wife "Bubbles" participated in a card club with friends for over 60 years.
He was employed at the Minonk Bakery, Hanks Service Station, Caterpillar Tractor Company and he was the owner and operator of the Minonk Locker for many years. After his retirement he was the janitor at the UAW Local 2488 Labor Hall.
Funeral mass will be at 10:30 a.m., Friday, July 17, 2015 at St. Patrick's Catholic Church, Minonk. Franciscan Friars will officiate. Visitation will be from 9 a.m. until time of mass at the church. Ruestman-Harris Funeral Home, Minonk is assisting his family with arrangements. Burial with full military honors will be in St,.Patrick's Catholic Cemetery, Minonk.
"Shock" always had a smile on his face and never met a stranger no matter where he went. He enjoyed going to the river boat with his family and friends. He and "Bubbles" often took daily trips that tool them to many destinations. Most of all he was a loving husband, dad, grandpa and friend and will be missed by all.
Memorial contributions in his name may be directed to St. Patrick's Catholic Church, Minonk Online condolences may be sent to his family at ruestmanharrisfuneralhome.com.


To send flowers to the family or plant a tree in memory of Richard L. "Shock" Shelby, please visit our floral store.

To send flowers to the family in memory of Richard Shelby, please visit our flower store.