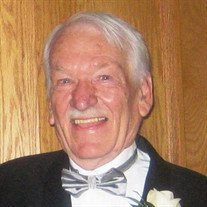 His funeral service will be at 3 PM on Thursday July 19, 2018 at Ruestman-Harris Funeral Home in Minonk Visitation will be 2 hours prior to services from 1-3 PM at the funeral home and burial with full military rites will be in Minonk Township Cemetery, Minonk.

Memorials may be made to Threads of Love.

Richard was born on June 11, 1934 in Minonk, a son to Herman Fredrick and Esther Louise Garner Cremer. He married Claudette Coffman on November 9, 1968 in Marine, Illinois. She survives.

He was preceded in death by his parents; a brother, Donald Cremer; and a sister, Marian Buckner.

Richard graduated from Minonk-Dana-Rutland High School. He served in the United States Army. He later attained his pilot's license. Richard was a mechanic for many years; retiring in 1996 from John Bearce Ford. He enjoyed the outdoors and fishing. He was also very passionate about his volunteer work he did for the American Red Cross where he traveled to many places to help with natural disasters.


To send flowers to the family or plant a tree in memory of Richard T. Cremer, please visit our floral store.

Please click here to view the video tribute
To send flowers to the family in memory of Richard Cremer, please visit our flower store.