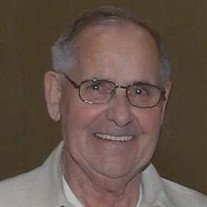 He was born on August 22, 1922 in Cornell, IL a son of Claud Ivan and Mabel Josephine Morris Cashmer. He married Margaret Faye Slauenwhite on June 2, 1945 in Barnstable, MA. She passed away in 1985.

He was preceded in death by his parents, one daughter Anna Marie Copeland, and three sisters.

Richard had worked as a manager at South Gate Honda. He was a Navy veteran who served his country during WWII and was a member of the Normal American Legion #0635. He was also a Charter Member of the Bloomington/Normal Motorcycle Club.

He was a wonderful father and provider filled with talent and creativity. In his early years he raced midget cars, was a long haul trucker, owned/operated a Heating and Plumbing business with his father, was a brick-wheeler, owned/operated a filling station and garage, owned/operated a Snap On Tools franchise, and later in life was very involved in motorcycle sales and repair while managing Brown's Home and Auto, Capodice Suzuki, and South Gate Honda.

Funeral services will be held at 1:00 pm on Monday, March 7, 2016 at the Ruestman-Harris Funeral Home in El Paso. Rev. Don Lybarger will officiate. Visitation will be held from 11-1 pm before the service at the funeral home. Burial with military honors will be in Secor Cemetery.

Memorials may be made to the donor's choice of any local food pantry. Online condolences may be sent to www.ruestmanharrisfuneralhome.com.


To send flowers to the family or plant a tree in memory of Richard Daniel Cashmer, please visit our floral store.

Please click here to view the video tribute
To send flowers to the family in memory of Richard Cashmer, please visit our flower store.