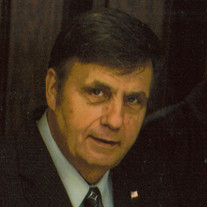 He was employed by Fieldcrest School District as a bus driver. He retired as a welder from Interlake in 2004. He also served as a police officer in Minonk for 13 years .He enjoyed gardening and he especially loved the time he spent with his family. He was a member of The Knights of Columbus, and the American Legion Post 142.

Ray was also a member of St. Patrick's Catholic Church in Minonk where a mass of Christian burial will be celebrated at 11 AM on Friday March, 06, 2015. Franciscan Friars will officiate. Visitation will be on Thursday March 5, from 4-7 PM at Rustman-Harris Funeral Home in Minonk where a Rosary will be recited at 3:45 PM. Interment will be in St. Patrick's Catholic Cemetery, Minonk where Military Honors will be presented..
Memorials may be designated to OSF Hospice.


To send flowers to the family or plant a tree in memory of Raymond F. Persic, please visit our floral store.

Please click here to view the video tribute
To send flowers to the family in memory of Raymond Persic, please visit our flower store.