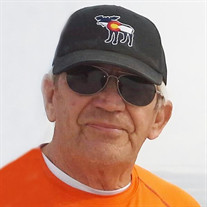 His memorial service will be at 10:30 a.m. on Friday, July 13, 2018 at St. Paul's United Church of Christ in Minonk with Pastor Ed Sinclair officiating. Visitation will be from 4-7:00 p.m. on Thursday at Ruestman-Harris Funeral Home in Minonk.

Intement will be in Minonk Township Cemetery in Minonk with full Military Honors. Memorials may be directed to St. Paul's United Church of Christ Kitchen Fund.

After graduating from Rockford East High School, her entered the University of Illinois and pledged Farm House Fraternity. After graduating, Randy proudly served in the United States Army during the Vietnam War until 1967.

Randy worked at the Chicago Livestock Exchange in Chicago before beginning his lifelong love of farming.

He served on the Benson Farmers Elevator Board, M-D-R School Board and Clayton Bennington Drainage District. He was a member of the ASCS Committee and St. Paul's United Church of Christ.

Randy was a loving husband, father and grandfather and will be greatly missed.

To send flowers to the family or plant a tree in memory of Randolph 'Randy' G. Johnson, please visit our floral store.

Please click here to view the video tribute
To send flowers to the family in memory of Randolph Johnson, please visit our flower store.