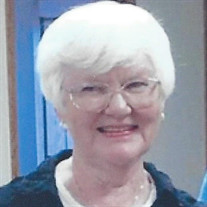 She was born January 13, 1937 in Panola Township to Roy and Alta (Holt) Pinkham. She married Marvin Schneider on September 1, 1957 in El Paso. He survives.

She was preceded in death by 1 sister and 1 brother.

Peggy was working as a secretary for Soy Capital in Bloomington. She enjoyed cutting and handywork as well as stitching and was a member of Eastview Christian Church in Bloomington.

A private family service will be held at Ruestman-Harris Funeral Home in El Paso. Burial will be in Evergreen Cemetery in El Paso.

Memorials may be made to Eastview Christian Church in Bloomington.
Online tributes and condolences may be made at www.ruestmanharris.com

To send flowers to the family or plant a tree in memory of Peggy Gail Schneider, please visit our floral store.

To send flowers to the family in memory of Peggy Schneider, please visit our flower store.