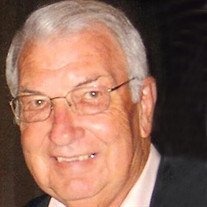 A memorial service will be held on Saturday May 2, 2015 at 2 PM at Ruestman- Harris Funeral Home in El Paso. The Rev. Jonathan Boehne will officiate. Visitation will be 1 hr prior to the service from 1 PM- 2 PM at the funeral home. Cremation has been accorded and inurnment will take place at a later date. Military Honors will be presented after the service at the funeral home.

Memorials may be directed to the American Lung Association.

Paul was born on November 7, 1935 in Carterville, IL a son of the late Feral and Lela Smith Sizemore.

He married Elizabeth "Anne" Steinfeldt at the United Methodist Church in Washington on July 1, 1956. Anne survives.

He was preceded in death by 2 brothers.

Paul graduated from Knox College, the class of 1957 where he was a member of the Beta Theta Pi fraternity. He served in the United States Army as a First Lt. and was stationed at Fort Monmouth from 1958-1960. He retired from Ameritech as a Telecommunications Executive in 1989 and was able to enjoy 25 years of retirement. He was well known for running Beagles in field trials in the Midwest. He adored raising puppies and competing in National Field Trials where he reached the Beagling Hall of Fame. He was a family man. He was an outdoors man. Some of his greatest times were spent outside with his sons and grandsons fishing, swimming, ATV riding, and target shooting.

Ruestman-Harris Funeral Home is in charge of arrangements. Online condolences may be directed to his family at www.ruestmanharrisfuneralhome.com


To send flowers to the family or plant a tree in memory of Paul T. Sizemore, please visit our floral store.

To send flowers to the family in memory of Paul Sizemore, please visit our flower store.