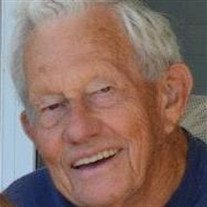 Melvin enlisted in the army out of high school at Camp McCoy, WI in 1942. As a private, he was trained as an aircraft armament specialist in Lansing, MI and then in aerial torpedoes at San Diego, CA. After completing his military training he was assigned to the 75th Bomb Squadron, 45th Bomb Group, which was under the command of the 13th Air Force (Army Air Corps/Forces) in the southern pacific theater. While in the South Pacific he saw duty in New Guinea, Bougainville, Guadalcanal, New Caledonia, and the Philippines. During his combat tour Cpl Lay was cross trained as an electrician where he installed and maintained electric generators for many of the combat bases. In addition to his other duties he was also assigned to antisubmarine duty. During his tour of duty during WWII Cpl Paul Melvin Lay was awarded the Good Conduct Medal, Asiatic Pacific Theater Service Medal, Philippines Liberation Ribbon with 1 Bronze Star, American Theater Service Medal with 1 Bronze Star and 5 overseas bars. In 2009 Melvin thoroughly enjoyed an historic ride from Peru, IL to Peoria in a Grumman TBM Avenger flown by his friend Brad Deckert. The TBM Avenger was a WWII torpedo bomber designed to carry the 2000 pound Mark 13 torpedo which for which he was trained as a technician.

A memorial celebration of Life service for Melvin will be held at 12 noon, Tuesday, June 30, 2015 at Ruestman-Harris Funeral Home in El Paso. Rev. Wes Ooms will officiate. Visitation will be held two hours prior to services from 10 to 12 noon at the funeral home. Cremation will be accorded.

Online tributes and condolences may be made at ruestmanharrisfh.com.


To send flowers to the family or plant a tree in memory of Paul Melvin Lay, please visit our floral store.

Please click here to view the video tribute
To send flowers to the family in memory of Paul Lay, please visit our flower store.