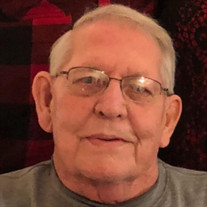 He was born November 25, 1939 in Bethalto, IL to Clarence and Viola (Eberhart) Suessen. He married Donna Miller-Edmiaston on November 1, 1987 in Decatur, IL. They were married for 31 years. She survives

He was preceded in death by his parents, one sister Darlene Eberhart Zoelzer and one nephew.

Orville served in the U.S. Army Reserves during the Korean Conflict. He retired from Kroger Inc. after 40 years of service, working his way up from bagger to unit store manager. He was a member of First Baptist Church of El Paso and former church properties manager. He also mowed grass for the parks and recreation in Bloomington, mowing the Prairie Vista golf Course Greens. He enjoyed playing golf and was a big NASCAR fan and a fan of both Dale Earnhardt Sr. and Jr. Most of all Orville loved spending time with his family, especially the grandchildren.

Funeral services will be held at 11 a.m., Thursday, May 30, 2019 at First Baptist Church of El Paso, Rev. Russell Zehr will officiate. Visitation will be from 4 to 7 p.m., Wednesday, at Ruestman-Harris Funeral Home in El Paso. Burial will be in Evergreen Cemetery.

Memorials may be made to First Baptist Church of El Paso.


To send flowers to the family or plant a tree in memory of Orville E. Suessen, please visit our floral store.

Please click here to view the video tribute
To send flowers to the family in memory of Orville Suessen, please visit our flower store.