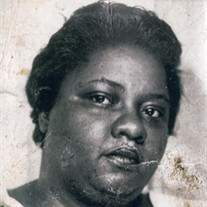 Bloomington-Ora Lee Simmons, 81, of Bloomington, passed away on
Friday, September 20, 2013 at 4:45 pm in Bloomington at Asta Care
Center.

Funeral services will be held on
Saturday, September 28, 2013 at Loving Missionary Baptist Church in
Bloomington at 11:00 a.m. with Pastor William L. Johnson
officiating, Visitation will be held from 10-11:00 a.m. on Saturday
prior to the service at the church.

Interment will be in Evergreen
Memorial Cemetery in Bloomington. In lieu of flowers, memorials may
be directed to the family in Ora Lee's name. The family of Ora Lee
has entrusted the care of their loved one to Kibler-Brady-Ruestman
Memorial Home in Bloomington.

In addition to her husband Hubert,
Ora Lee was preceded in death by her parents, and a daughter, Annie
Mae Simmons, along with two brothers, Al Griffin and Benny Coffey
and a sister, Jessie L. Singleton.

Ora Lee was raised by her mother
and step father, the late Mary Harvey Coffey and grandmother,
Estelle Steel. Ora was the oldest of 16 siblings. She was married
when she was 16 years old and then headed north to Chicago from
Mississippi. She was a great homemaker and a loving mother who did
wonders rearing her children. Ora Lee enjoyed spending time with
her grandchildren, loved cooking, and playing cards. She was dearly
loved by her family and friends and will be sadly missed but never
forgotten.

Online condolences and memories of
Ora Lee may be sent to the family at kiblerbradyruestman.com.

To send flowers to the family or plant a tree in memory of Ora Lee Simmons, please visit our floral store.

To send flowers to the family in memory of Ora Simmons, please visit our flower store.