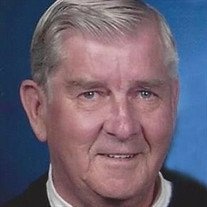 Funeral Services will be held 10:00 am on Thursday, June 4, 2015 at Ruestman-Harris Funeral Home, El Paso. Pastor Stephen Jeffreys and Pastor Shelly Forrest will officiate. Visitation will be held on Wednesday, June 3 from 4-7 pm with masonic rites at 7 pm at Ruestman Harris Funeral Home, El Paso. Interment will be in Evergreen Cemetery, El Paso with full military honors.

Opie was preceded in death by four brothers and one sister.

Opie graduated from El Paso High School in 1948. He served as a medic in the Army where he was stationed at Landstuhl, Germany from 1951-1953. He was the owner of Hocker's Dairy, El Paso until his retirement in 1992. He was a member of the El Paso United Methodist Church; was a 50 year member of the El Paso Golf Club, El Paso American Legion, and El Paso Masonic Lodge #246. Opie was an avid Illini, Cubs, and Bears fan.

He was a family man and enjoyed the time he spent with Ann, his children, and grandchildren, and his favorite dogs Max and Fergie.

The family would like to extend gratitude toward the staff at Heritage Care Center for the care Opie received during his stay.

Memorials may be given to El Paso Rescue Squad, or El Paso Food Pantry.
Online Condolences may be directed to his family at www.ruestmanharrisfuneralhome.com


To send flowers to the family or plant a tree in memory of Opie J. Hocker, please visit our floral store.

Please click here to view the video tribute
To send flowers to the family in memory of Opie Hocker, please visit our flower store.