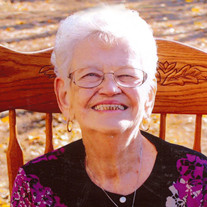 Her funeral service will at 10:00 a.m. on Saturday, December 2, 2017 at First Baptist Church in Minonk. Rev. Jeremy Heitkam will officiate. Committal service will be on Saturday at 3:00 p.m. in Young America Cemetery in Hume. Visitation will be on Friday from 4-7:00 p.m. at Ruestman-Harris Funeral Home in Minonk.

Memorials may be made to OSF Hospice.

Peggy was born on September 20, 1931 in Elbridge, Illinois, a daughter to Kellie and Edith Baker Emrick. She married William R. "Bill" McMullen on February 2, 1952 in Hume, Illinois. He preceded her in death on October 20, 2011.

She was preceded in death by her parents; a son, Russell Alan; three brothers and two sisters.

Peggy was a member of Minonk Garden Club. She attended First Baptist Church in Minonk and had been a member at Yorkfield Presbyterian Church in Elmhurst where she was active in her prayer group.

To send flowers to the family or plant a tree in memory of Nina "Peggy" Mae McMullen, please visit our floral store.

Please click here to view the video tribute
To send flowers to the family in memory of Nina McMullen, please visit our flower store.