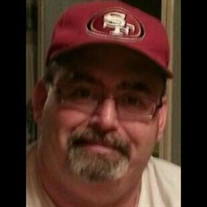 He was preceded in death by his father and grandparents.

Nigel was working at the Caterpillar location in Pontiac as a laborer. Prior to Caterpillar he worked at Walmart for eight years.

Nigel was a U.S. Army veteran serving eight years before being honorably discharged. He grew up in Streator before moving to Minonk. He is an avid pool player and loves music and singing karaoke. Nigel is a big fan of Pink Floyd, the Three Stooges and good food. He was also a San Francisco 49er's fan. He enjoyed spending time with his family whenever he could. He was also a member of Minonk Baptist Church.

Funeral services will be held at 5:30 p.m., Wednesday, May 10, 2017 at Ruestman-Harris Funeral Home in Minonk. Rev. Eric Holtrop will officiate. Visitation will be two hours prior to services on Wednesday from 3:30 to 5:30 p.m. at the funeral home. Cremation will be accorded.

Memorials may be made to Minonk Baptist Church. Online condolences may be sent to the family at www.ruestmanharrisfuneralhome.com.


To send flowers to the family or plant a tree in memory of Nigel Seth Wood, please visit our floral store.

Please click here to view the video tribute
To send flowers to the family in memory of Nigel Wood, please visit our flower store.