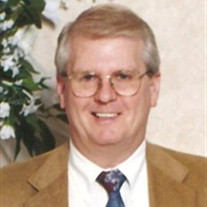 
He was preceded in death by his parents and one
sister, Linda Lowery.


Mike was a medic with the National Guard and was a
member of the Roanoke American Legion Post # 463.


He was a barber and hairstylist for many years
owning and operating the Cutting Corner in Roanoke for 25 years. He
also had owned and operated the Triangle Inn in Roanoke and worked
for National Wheel-O-Vator in Roanoke.


Always putting others first and willing to give of
his time, he was very active in his community over his life. He had
served as a volunteer fireman for the Roanoke Fire Department for
15 years, currently serving as vice-president of the Roanoke Fire
Protection District. He was a past member of the Roanoke Jaycees
and Roanoke Businessman's Association. He had served on the city
council and also the on the school district's Citizen's
Communication Council.


Mike was a member of the Trinity Lutheran Church
where he had served in the past as church elder and was an advocate
for the Lutheran Mission for the Blind.


With Mike, his faith and his family always came
first. His faith helped him get through the health battles over the
years, and his positive attitude was an inspiration to others. He
had such a magnetic personality and was known for his sense of
humor and being a jokester. He will be greatly missed by all of
those that he touched.


A memorial service will be held at 11:00 a.m. on
Monday August 5, 2013 at the Trinity Lutheran Church in Roanoke.
Rev. Bruce Scarbeary will officiate. Visitation will be held from
1-3 pm on Sunday at Knapp-Johnson-Harris Funeral Home in Roanoke.
Cremation rites will be accorded and burial of ashes will be in
Roanoke Township Cemetery at a later date.


Memorial contributions may be made to the American
Cancer Society or to the Trinity Lutheran Church. Online
condolences may be sent to the family at
www.knappjohnsonharris.com.

To send flowers to the family or plant a tree in memory of Mike Orr, please visit our floral store.

To send flowers to the family in memory of Mike Orr, please visit our flower store.