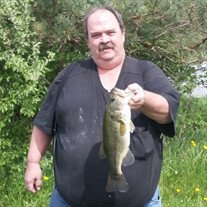 Michael A. Vandegraft 57, of Benson passed away on October 25, 2019 at his residence. He was born on January 25, 1962 in Bloomington, IL the son of Bill and Mary (Kearfott) Vandegraft.
Mike is survived by his mom: Mary Vandegraft of El Paso, siblings: Cora Parrish of Normal, Doug Vandegraft of El Paso, Becky Vandegraft of El Paso and one brother-in-law: Don McKinley of Kappa. He is also survived by several nieces and nephews: Donnie (Dawn) McKinley, Brian McKinley, Phil (Michelle) McKinley, Rodney (Lola) McKinley; Bill Parrish (Jennifer), Laurie Parrish, Jesse Vandegraft and Dennise (Craig) Jones. Great nieces and nephews include: Gage McKinley, Kierstyn (Brendan) Decker, Olivia McKinley, Morgan McKinley, Gabe and Logan McKinley, Gabby and Heather Stine, Blade, Emily and Ellysa Parrish, Jayden and Hunter Jones and one great great-nephew Lincoln Decker. He was preceded in death by his Dad: Bill Vandegraft; Sister: Yvonne McKinley; Brother: Eddy Vandegraft and Sister-in-Law: Fredaline Vandegraft and Niece: Julie Parrish.
Mike worked for Whitacre's Country Oak in Hudson. He was well known for his ability to fix anything. He previously was the head grounds keeper at Fairlakes Golf Course, Secor. Mike enjoyed bass fishing, golfing, anything outdoors and was an avid fan of the Chicago Cubs and New England Patriots.
A visitation will be held on Tuesday October 29, 2019 from 4pm to 7pm at Ruestman-Harris Funeral Home in El Paso. Funeral services will be on Wednesday October 30, 2019 at 11am at Ruestman-Harris Funeral Home in El Paso. There will be visitation one hour prior to the service. The service will be officiated by Brandon Current.
Memorial contributions in honor of Mike may be directed to The Multiple Sclerosis Foundation or St. Jude's. Online tributes and condolences may be made at www.ruestmanharrisfuneralhome.com.


To send flowers to the family or plant a tree in memory of Michael Alan Vandegraft, please visit our floral store.

Please click here to view the video tribute
To send flowers to the family in memory of Michael Vandegraft, please visit our flower store.