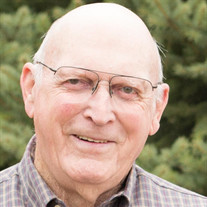 He was born November 16, 1930 in Benton, IL to Walter and Lillian (Midyette) Franke. He married Dorothy I. Miller on February 25, 1951 at St. John's Lutheran Church in Secor, IL. They just celebrated an incredible 65 years of marriage.

Merlin graduated from El Paso High School in 1948. He was the co-owner and operator of El Paso Fertilizer and Flanagan Fertilizer for over 25 years. Merlin was involved in many activities during his life. He enjoyed bowling, playing cards, fishing, and spending time with his family. Merlin was also an El Paso volunteer firefighter for more than 35 years and enjoyed Stock Car racing from 1977 to 1982 winning many trophies and a championship.

He was a member of Trinity Lutheran Church in El Paso where services will be held at 11 a.m., Thursday, June 16, 2016. Rev. Jonathan Boehne will officiate. Visitation will be from 5 to 7 p.m., Wednesday, at Ruestman-Harris Funeral Home in El Paso. Burial will be in Evergreen Cemetery.

To send flowers to the family or plant a tree in memory of Merlin Franke, please visit our floral store.

Please click here to view the video tribute
To send flowers to the family in memory of Merlin Franke, please visit our flower store.