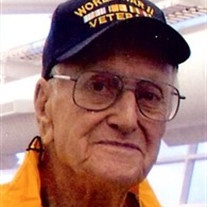 
He was preceded in death by a sister, Bea Pond; and
an infant brother.


Merle served his country in the Army during World
War II as a PFC in the 109th Infantry Regiment at the
European Theater of Operations. He was awarded a bronze star for
his efforts. He later was proud to be able to participate on an
Honor Flight to Washington D.C. Merle was also an avid
fisherman.


Cremation has been accorded and a burial of cremains
will take place at a later date.


Ruestman- Harris Funeral Home in Minonk is assisting
the family with arrangements.


Memorials may be directed to the Minonk Methodist
Church or the Minonk Rescue Squad.


Online condolences may be directed to his family at
www.ruestmanharrisfuneralhome.com.

To send flowers to the family or plant a tree in memory of Merle Santelman, please visit our floral store.

To send flowers to the family in memory of Merle Santelman, please visit our flower store.