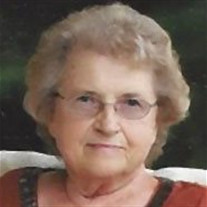 Gridley- Mary Ellen Stoller, 90, of Eureka, IL formerly of Gridley, IL passed away at 9:35 pm on Friday, August 1, 2014 at the Eureka Apostolic Christian Nursing Home where she had been a resident.

She was preceded in death by her parents, husband, three sisters; Ann Hagerty, Eunice Frank, Margaret Honegger-Shumacher; two brothers, Ed and Alvin Alt; and a daughter-in-law.

Mary Ellen graduated from Cissna Park High School and attended nursing school in Chicago. After marrying Harold they moved from Chicago to Odell then to Forrest where they farmed until moving to Gridley. They owned and operated several businesses in Gridley and Bloomington including a grocery store, locker and processing plants in Gridley and El Paso, a fertilizer plant, commercial coffee business, and Uniglobe Travel Agency in Bloomington. They moved to Lake Bloomington in 1973 and then later to Bloomington in 2000.

Mary Ellen was known as a very sweet, kind, and gracious lady. She loved to travel to other countries to experience their cultures, but her priority throughout life was always her faith in God and her family.

Funeral services will be held at 11:00 am on Saturday, August 9, 2014 at the Gridley Apostolic Christian Church where she was a member. Church ministers will officiate. Visitation will be from 9-11 am before the service. Burial will be in Gridley Cemetery. Ruestman-Harris Funeral Home in El Paso is assisting the family with arrangements.

In lieu of flowers, memorial donations may be made to the Midwest Food Bank, 1703 S. Veterans Parkway Bloomington, IL 61701 or to the Eureka Apostolic Christian Nursing Home, 610 W. Cruger Eureka, IL 61530. Online condolences may be sent to the family at ruestmanharris.com.

The family would like to thank the staff at Bickford House in Bloomington and also the Eureka Apostolic Christian Nursing Home for their kindness, love, and care for their mother during her time there.


To send flowers to the family or plant a tree in memory of Mary Ellen Stoller, please visit our floral store.

To send flowers to the family in memory of Mary Stoller, please visit our flower store.