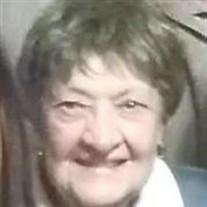 She was also preceded in death by her parents, one brother, John Gauger, Jr. and one sister Florence Marshall.

Mary Lou worked for Country Companies as a secretary for 20 years before retiring. She was a member of St. Paul's UCC in Minonk. She was a former member of Rebecca's, and served as an election judge. Mary Lou also enjoyed needle work such as knitting and needlepoint.

Funeral Services will be held at 11 a.m., Wednesday, March 1, 2017 at Ruestman-Harris Funeral Home in Minonk. Visitation will be from 4 to 6 p.m., Tuesday at the funeral home. Burial will be in Minonk City Cemetery.

Memorials may be made in Mary Lou's name to Susan G. Komen For The Cure.
Online tributes and condolences may be made at www.ruestmanharrisfuneralhome.com


To send flowers to the family or plant a tree in memory of Mary Lou A Stalter, please visit our floral store.

To send flowers to the family in memory of Mary Stalter, please visit our flower store.