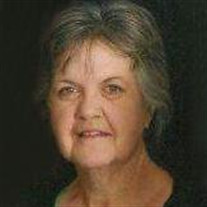 She was born on September 10, 1950 in Bloomington, IL a daughter of William and Mary Kearfott Vandegraft. She married Donald L. McKinley on February 21, 1970 in El Paso. He survives.

She was preceded in death by her father, one brother Eddy Vandegraft; and two sister-in-laws, Freddie Vandegraft and Barbara Yeske.

Yvonne had worked for Dupont and the IGA in El Paso and also for Hobby Lobby.

She was a member of the Hudson Christian Church.

Funeral services will be held at 10:30 am on Thursday, July 6, 2017 at the Ruestman-Harris Funeral Home in El Paso. Rev. Brandon Current will officiate. Visitation will be held on Wednesday evening from 4-7 pm at the funeral home. Burial will be in Hinthorne Cemetery.

Memorials may be directed to the El Paso Fire and Rescue or Hudson Christian Church. Online condolences may be sent to the family at www.ruestmanharrisfuneralhome.com.


To send flowers to the family or plant a tree in memory of Mary Yvonne McKinley, please visit our floral store.

Please click here to view the video tribute
To send flowers to the family in memory of Mary McKinley, please visit our flower store.