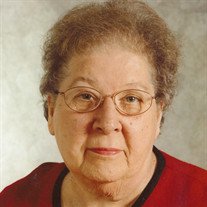 She was also preceded in death by her step-daughter Judith Sengpiel, one sister, 2 brothers and one grandson, Michael Huegerich.

Mary was a librarian for El Paso Library for more than 27 years and belonged to Volunteer Friends of Library. She was also involved in many civic organizations. She was a member of the Good Shepherd Community Church in El Paso.

A memorial service will be held at 3 p.m. on Sunday, February 8, 2015 at Ruestman-Harris Funeral Home in El Paso. Rev. John Liebert will officiate. Visitation will be one hour prior to services at the funeral home. Cremation will be accorded.

Memorials may be made to the El Paso Public Library.


To send flowers to the family or plant a tree in memory of Mary E. Byerly, please visit our floral store.

To send flowers to the family in memory of Mary Byerly, please visit our flower store.