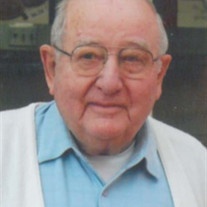 A memorial service will be held at
Trinity Lutheran Church on Wednesday, October 2, 2013 at 11 a.m.
with Pastor Thomas Wirsing officiating. Visitation will be held one
hour prior to the memorial service at the church. Inurnment will be
at East Lawn Memorial Gardens in Bloomington. Cremation rites have
been accorded. Kibler-Brady-Ruestman Memorial Home is assisting the
family with arrangements.

The family has requested memorials
may be made in Marvin's name to Trinity Lutheran School and the St.
Joseph Rehabilitation Program.

Marvin was born January 15, 1924 in
Chapin, Illinois, a son to Arthur and Minnie Van Herch Brockhouse.
He married Marietta McArthy on March 16, 1947 in Bloomington.

He was preceded in death by his
parents; one brother, Arthur Brockhouse; and two sisters, Irma
Baird and Dorothy Smith.

Marvin and Marietta joyfully owned
and operated the Park Store for many years. He served in the U.S.
Army Air Corps during World War 2 and was a charter member of the
original Crestwicke Country Club in Bloomington. Marvin enjoyed
wintering in Florida and was an avid bowler and golfer. He was also
a faithful Cubs fan. Marvin was a loving husband and father whose
sense of humor lives on in the hearts of his family.

To send flowers to the family or plant a tree in memory of Marvin D. Brockhouse, please visit our floral store.

To send flowers to the family in memory of Marvin Brockhouse, please visit our flower store.