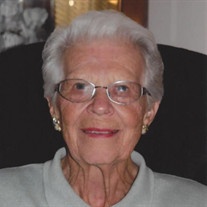 Minonk-Marjorie A. Kettwich, 91, of Minonk passed away at 5:08 am on Wednesday, February 3, 2016 at OSF St. James John W. Albrecht Medical Center in Pontiac, IL.

She was preceded in death by her daughter-in-law Marna Kettwich and four brothers, Kenneth, Duane, Delmar, and Gene Cunningham.

Marjorie had worked for the City of Minonk, MDR High School and Minonk Grade School as a cook and custodian. Her house was the neighborhood gathering place for her children's friends. She enjoyed family vacations of going camping and fishing. She also enjoyed playing cards, cooking, baking, and spending time with her friends.

She was a member of the First Baptist Church of Minonk.

Funeral services will be held at 11:00 A.M. on Saturday, February 6, 2016 at the Ruestman-Harris Funeral Home in Minonk. Rev. Eric Holtrop will officiate. Visitation will be held one hour prior to the service. Burial will be in Minonk Township Cemetery.

Memorials may be made to the First Baptist Church of Minonk. Online condolences may be sent to the family at www.ruestmanharrisfuneralhome.com.


To send flowers to the family or plant a tree in memory of Marjorie A. Kettwich, please visit our floral store.

Please click here to view the video tribute
To send flowers to the family in memory of Marjorie Kettwich, please visit our flower store.