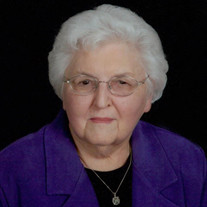 In addition to her husband of 62 years, Marcella was also preceded in death by her parents; her step-mother Alice Eigsti Rocke; her sister Margery Rocke Stalter and brother-in-law Raymond Stalter; and her brothers Dale (Grace) Rocke and Donald (Mary) Rocke and their spouses.

Marcella graduated from Flanagan High School and went to work at State Farm in Bloomington. Upon her marriage, she became a busy pastor's wife, first at Waldo Mennonite Church (Flanagan, Ill.) and then at Science Ridge Mennonite Church (Sterling, Ill.). Marcella also supported Jack's regional leadership with the Mennonite Church as Conference Minister for Illinois. They were also instrumental in establishing the Mennonite Heritage Center.

Marcella volunteered at the Spare and Share Shop (Gridley, Ill.) and Meadows (Ill.) Home. She was active in the Mennonite Women group at Prairieview Mennonite. She was a seamstress and quilter; her children, grandchildren and great-grandchildren will cherish the blankets and afghans she knitted for them. She also knitted prayer shawls and sewed many hundreds of bags for Mennonite Central Committee school and health kits. Marcella was an active correspondent and caught up on the phone and Facebook with family and friends of all ages.

A private graveside service is planned for Saturday, Nov. 21, at Waldo Township Cemetery. Ruestman-Harris Funeral Home in El Paso is assisting the family with arrangements.

To send flowers to the family or plant a tree in memory of Marcella R. Stalter, please visit our floral store.

To send flowers to the family in memory of Marcella Stalter, please visit our flower store.