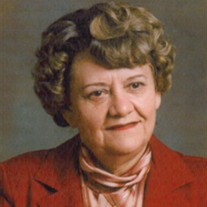 A Celebration of Life service will
be held at North Bridge Baptist Church, Normal, at 11:00 a.m. on
October 19, 2013 with Pastor Jan Hazecamp and Pastor Michael Sloan
officiating.  Inurnment will be in the Lindale Cemetery in
Eldorado, IL at a later date.  Kibler-Brady-Ruestman Memorial
Home in Bloomington is assisting the family with arrangements.

She was born in Dorisville, IL (now
Harrisburg) to R.R. Randolph, former Clerk of the House in the
Legislature and Ethel Hart Randolph on September 2, 1919, the
youngest of four children.

She married Wayne L. Smith of
Harrisburg in 1939.  They moved to St. Louis, MO where Wayne
was an assistant manager of the Woolworth store.  They
returned to Harrisburg where they owned two different
restaurants.  In 1947, they moved to Bloomington where Lola
was a housewife and devoted mother of Virginia Lee Owen,
Bloomington and Wayne Lee (Bernice Sutherland) Smith, Omaha,
NE.

After retirement, she and Wayne
spent a decade living on a small farm in Pope County, IL while
retaining their home in Bloomington.  Lola took up oil
painting at this time.  She studied with local artists and
faculty at Southern Illinois University and Milliken University and
with TV artists Alexander and Jenkins.  She won blue and red
ribbons at various festivals and art shows.  Her works are in
private collections in Illinois, Kentucky, Missouri and
Nebraska.

She was preceded in death by her
husband in 1983, her parents, her sisters, Vivian Reeves, Eldorado,
IL and Pauline Batonie, Bloomington and her brother Verdun
Randolph, Chatham, IL.

In lieu of flowers, contributions
in her memory may be made to the North Bridge Baptist Church,
Normal, IL, or a charity of the donor's choice.

The family is grateful for the
wonderful loving quality care given by the staff and administrators
at LeRoy Manor.  Heartfelt thanks to all of you!

To send flowers to the family or plant a tree in memory of Lola V. Smith, please visit our floral store.

To send flowers to the family in memory of Lola Smith, please visit our flower store.