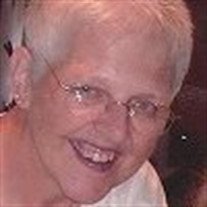 She was preceded in death by her parents, beloved husband of 45 years, one brother Billy, and two sisters Rosemary Starnes and Betty Jo Deatrick.

She worked 30 years for the El Paso Telephone Company, retiring in 2007.

She was a lifelong farm girl, showing Brown Swiss Dairy Cows and later the family switched to showing Purebred Registered Toggenburg Dairy Goats. She could be found at county fairs all over the state and was known by many.

She decorated cakes for 30 years and was a gifted cook and baker, winning several awards and "Best in Show" with her pies. She passed the love of baking on to her children and grandchildren.

She had a love of art and was a talented artist who enjoyed painting and graphic designs.

She was always up for a road trip and loved seeing the country with her family.

In her retirement years she loved watching her miniature donkeys and spoiling her grandchildren as much as possible.

Linda asked that you DO NOT wear black to her funeral because it's depressing. As she put it, "it's not going to be a funeral but a celebration of life." In her own words" LETS HAVE A PARTY."

In lieu of flowers, donations should be made to Woodford County 4-H. Online condolences may be sent to the family at www.ruestmanharrisfuneralhome.com.

The family would like to express a special thank you to the staff at Heritage Health in El Paso for going above and beyond in caring for our Mom and Grandma during her final days with us. They exceeded our expectations.


To send flowers to the family or plant a tree in memory of Linda J. Morris, please visit our floral store.

Please click here to view the video tribute
To send flowers to the family in memory of Linda Morris, please visit our flower store.