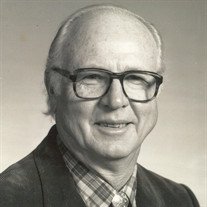 He was also preceded in death by his parents.

Gene graduated from Dwight High School in 1944. He then honorably served his country in the U.S. Navy during WWII. He was a member of the American Legion Post #0142 in Minonk for 70 years and was the organizer and leader of military honors provided to veterans for most of those 70 years.

Gene was a lineman and supervisor for Common Wealth Edison, now Exelon Electric Co., for 40 years working out of Minonk, Streator and Joliet. In his younger years, he enjoyed hunting and trap shooting. He also enjoyed feeding the birds and squirrels in his yard, golfing at Tall Oaks, and bowling.

Gene was a member of Immanuel Lutheran Church in Minonk where Funeral services will be held at 11 a.m., Tuesday, July 18, 2017. Pastor Joy Miller will officiate. Visitation will be Monday from 4 to 7 p.m., at Ruestman-Harris Funeral Home in Minonk and Tuesday, one hour prior to services at the church. Burial will be in Minonk Township Cemetery.

Memorials may be made to Immanuel Lutheran Church or a charity of the donor's choice.

To send flowers to the family or plant a tree in memory of Leo "Gene" Tweedt, please visit our floral store.

To send flowers to the family in memory of Leo Tweedt, please visit our flower store.