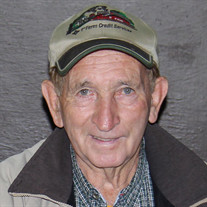 Leo Clement Stokes, 82, of El Paso passed away peacefully with family by his side on Tuesday evening (February 21, 2017). Leo was born on July 15, 1934 in Bloomington, IL to Veronica (DuBois) and Clement Stokes. He was one of five children. Leo never met a stranger and always had a story to tell. He offered his helping hands to anyone and shared his wisdom with many generations.

Leo spent his whole life in agriculture and his true passion was raising livestock. He and his brother and sisters were active in Woodford County 4-H, often showing four categories of livestock: Beef, Dairy, Sheep and Swine. Leo was a Future Farmers of America (FFA) member and served as an FFA state officer. Leo received many awards during his life. To share a few: the National FFA American Farmer Degree, top 4-H member in Illinois Club Congress, and winner in the National Meat Animal Contest held in Chicago.

Leo was proud to be a farmer in Central Illinois and to carry on what his Irish relatives started in the mid-1800s. Leo was well-known in the 1960's for his purebred Hampshire hogs, and even had some of his breeding stock flown non-stop from O'Hare to Germany for purchase by international buyers. Leo also raised Chester White hogs and Black Angus cattle. A large Stokes Farm sign on Route 116 directed people to the Stokes home place for the many livestock sales and farmer association field days he hosted.

Leo met the love of his life, Sue (Sullivan) Stokes, while calling a Square Dance at a young Catholics event in suburban Chicago. They married on April 12, 1969 in Glen Ellyn, IL. Leo and Sue lived in Chicago before moving in 1971 back to the farm in El Paso. In 1999, they moved off the farm to Gridley and then, Leo later retired to Mercy Creek in Normal.

Leo was a devoted parishioner of St. Mary's Catholic Church in El Paso and a member of the Knights of Columbus. He served on the Heart of Illinois Fair board of directors in Peoria with great joy for 50 years and also experienced the fair as a young exhibitor. He was active in the Foresters, served as a long-time Woodford County 4-H leader and volunteered in the community. Leo served his country in the United States Army at Fort Lewis Washington from 1958-1959.

He is survived by four children, Kathryn (Matthew) Gamewell, Newport Beach, CA; Renee Stokes, Evanston; Daniel Stokes, Chicago; and David Stokes, Bloomington. He was blessed with five grandchildren, Mallory and Andrew, both of Newport Beach, and Jack, Abigail and Nicholas, all of Bloomington. Also surviving are two siblings, Irene Douglas of Paradise Valley, AZ and Lois Botsford of Frenchtown, MT. He is preceded in death by his wife, Sue and two brothers - Edward and Patrick.

Prayers of the rosary will begin at 3:30 p.m. and the visitation will be from 4 to 6 p.m. on Sunday, February 26th at Ruestman-Harris Funeral Home, El Paso. The funeral Mass will be at 11 a.m. on Monday, February 27th at St. Mary's in El Paso followed by a luncheon in the church hall. Father John Steffen will officiate. On the day of the funeral, there will be a visitation from 10:00 to 10:45 a.m. at St Mary's. Burial will be in St. Mary's Cemetery with full military honors.

To send flowers to the family or plant a tree in memory of Leo C. Stokes, please visit our floral store.

Please click here to view the video tribute
To send flowers to the family in memory of Leo Stokes, please visit our flower store.