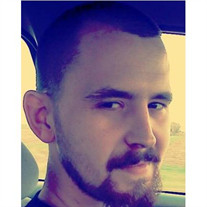 Rutland- Kevin Joseph Griffin, 31, of Rutland, IL passed away at 4:15p.m. on Saturday, October 10, 2015 at his residence.
He was born on April 9, 1984 in Bloomington, IL a son of John R.Riley and Linda Griffin.
Survivors include his mother and step-father, Linda Griffin and Bob Roney of Rutland; one son, Dom Griffin of Wenona; one daughter, Abby Griffin of Flanagan; maternal grandmother, Fay Lingle of Minonk; four sisters, Kelly Lindsay of Streator; Shannon Griffin-Johnson of Lacon; Missy(Ryan) Ramon of Streator; Amanda(John) Whited of Minonk; two step-sisters, Mary Ann Bennett of Pontiac; Tonya (Mike) Curley of Metamora; several aunts and uncles; numerous nieces and nephews.
He was preceded in death by his father, one sister, Lynette Griffin; one step-brother, Robert Roney Jr. and his grandparents.
Kevin is loved and missed by all but holds a very special bond with his nephews, nieces and his children. See ya later, Uncle Kev.
Memorial visitation will be held on Thursday, October 15, 2015 from 6-8p.m. at Ruestman-Harris Funeral Home in Minonk. Private family graveside services will be held at Rutland Cemetery where Reverend Rita Lovell will officiate. Cremation rites will be accorded. Ruestman-Harris Funeral Home in Minonk is assisting the family with arrangements.
In lieu of flowers, memorials may be made to the family to help with final expenses. Online tributes and condolences may be sent to www.ruestmanharrisfuneralhome.com.


To send flowers to the family or plant a tree in memory of Kevin Joseph Griffin, please visit our floral store.

To send flowers to the family in memory of Kevin Griffin, please visit our flower store.