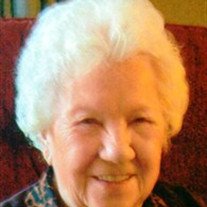 
She was preceded in death by her parents, husband, one son, Steven
Eden; and one brother Joseph.


Kathryn was co-owner of Eden's Taco House in Peoria for 20 years
and the Eden's Club 116 in Roanoke until she retired in 1992.


She was a member of the Trinity Lutheran Church in Roanoke.


Funeral services will be held at 11:00 am on Saturday April 5 at
the Knapp-Johnson-Harris Funeral Home in Roanoke. Rev. Bruce
Scarbeary will officiate. Visitation will be held from 9-11 am on
Saturday before the services at the funeral home. Burial will be in
the Roanoke Township Cemetery.


Memorial contributions may be directed to a charity of the donor's
choice.


Online condolences may be sent to the family at www.knappjohnsonharris.com.

To send flowers to the family or plant a tree in memory of Kathryn Eden, please visit our floral store.

To send flowers to the family in memory of Kathryn Eden, please visit our flower store.