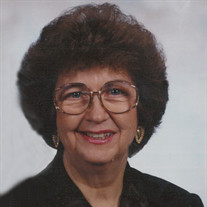 She was born on October 25, 1929 in El Paso, IL a daughter of James and Louise Rien Everett. She married Lyle R. McWilliams on November 30, 1947 at the El Paso United Methodist Church. He survives.

She was preceded in death by her son, Michael; four brothers, and an infant sister.

Joanne worked for Woodford County as Supervisor of Assessments.

She was a member of El Paso United Methodist Church. She especially enjoyed her time spent with her family and grandchildren.

Funeral services will be held at 10:30 am on Saturday, August 1, 2015 at Ruestman-Harris Funeral Home in El Paso. Rev. Stephen Jeffreys will officiate. Visitation will be held on Friday from 4-7 pm at the funeral home. Burial will be in Evergreen Cemetery.

Memorials may be made to the St. Jude Children's Hospital. Online tributes and condolences may be directed to his family at www.ruestmanharrisfuneralhome.com.


To send flowers to the family or plant a tree in memory of K. Joanne McWilliams, please visit our floral store.

To send flowers to the family in memory of K. McWilliams, please visit our flower store.